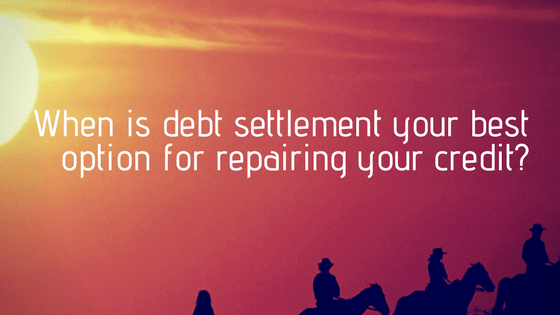 When is debt settlement your best option for repairing your credit?

I’ve sat down with hundreds – if not thousands – of clients over the last few years, each one with their own unique financial situation and story of how they got there. But the one thing that they all have in common is that they have far too much debt – and are rapidly running out of options how to pay it off.

In fact, Americans now have more than one trillion dollars just in credit card debt – and our collective balances are up 3% just from last year! Add in record levels of student loan and medical debt, and the average American family is walking a financial tightrope like never before.

Of course, when consumers find themselves in a significant amount of revolving or other bad debt, it has a profound negative impact on the rest of their finances. Too often, they’re paying only the monthly minimum, which means that they’re actually paying high interest charges over a really long time (sometimes, 20 years or more!) just to become debt free. In the meantime, when we look at their monthly budget, we find that they’re struggling to make ends meet and definitely not allocating enough to savings, retirement, or other investments.

So what options do you have to effectively get out of debt, move on, and then repair your credit score? While it can be confusing when you’re in that situation, there are essentially five options for you (and not all of them good):

Millions of Americans turned to debt settlement to help them get out of credit card debt during the last economic downturn. In fact, banks, lenders, and credit card companies regularly renegotiating to accept settlements and short payoffs from consumers who are late. It’s in their best interest, too, as research proves that they’ll receive far less if the account goes to collections or the borrower declares bankruptcy.

“The first step in repairing your credit is getting your debt under control,” says Jeff Sipes, President of Blue Water Credit, providing credit repair services in San Jose. “Once your debt is under control, you will have a much better success in maintaining a healthy credit score.  Speaking from my own experience, getting out of credit card debt is one of the hardest yet most rewarding things I’ve done.”

So how do you know when debt settlement is the best option for becoming debt free AND saving your credit?

Winning the lottery aside, most people realize that continuing to make minimum payments forever – and continuing to slip further behind financially – is not a viable option. If you’re working hard just to make minimum payments, but neglecting savings, retirement, and other essential financial safety nets, then you should really do something before the situation becomes completely untenable.

So, most people are then faced with one important choice: to declare bankruptcy and completely trash their credit in the process, or to work with a reputable and experienced debt settlement company like Roundleaf Inc. to negotiate with their creditors. Of course, most people don’t want to start with something as drastic as bankruptcy (and they also may not qualify as there are income and asset limits, etc.) if there’s a better way.

Therefore, for those consumers that qualify, debt settlement allows them to formulate a responsible plan where we’ll work WITH their creditors to accept a smaller payout, allowing them to become debt free in a few years or less and avoid the Scarlet Letter of a “BK” on their credit report.

To be clear, debt settlement will impact your credit score, but the damage is done from missing payments (which is why the creditors are motivated to settle), not the settlement itself. Remember, too, that maxing out all of your credit cards and having too many accounts that you owe to creditors (and the wrong kinds of accounts) is already dinging your score, so the damage is already being done.

One by one, as the settlements are complete, and your debt rapidly vanishes, it will be much simpler to start building your credit back up and repair your score, allowing you to move on to a much brighter financial future.

Just like a doctor needs to set a broken leg before he or she can put it in a cast so it will heal correctly, you have to eradicate your debt first before repairing your credit score – and that’s why debt settlement is the best option for many consumers.

5 More things you NEED to know about debt negotiations and settlements.

The Math Behind the Minimum: Calculating the true cost of credit card minimum payments

Ask the best in the business: 5 Things you should know about debt negotiations and settlements.

Breaking down successful debt negotiations and settlements:  The leverage of the lump sum.