Let’s say a friend approaches you one day, asking for a loan. Maybe they’ve had some unexpected costs or a cutback at work? Whatever the reason, you hand them $1,000. But, even though they’re a friend, you want to be smart about it, so you set the terms of the loan very clearly – they […] 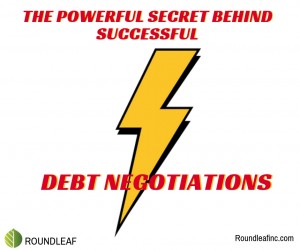 Let’s say a friend approaches you one day, asking for a loan. Maybe they’ve had some unexpected costs or a cutback at work?

Whatever the reason, you hand them $1,000. But, even though they’re a friend, you want to be smart about it, so you set the terms of the loan very clearly – they are to pay you back $100 per week, every Friday, for 10 weeks until the loan is paid off.

You even make them sign an agreement, which they do so willingly.

But the next Friday, they only have $50 for you, but apologize and promise they’ll make it up the next week.

However, when that third Friday comes, they have no money for you. In fact, they stop returning your calls and begin to avoid you around.

What are you going to do?

You’ll probably experience a fair share of disappointment and then anger, but after that, you have few options.

You can try to call them more, show up at their house, or try to put pressure on them through mutual friends.

But those solutions have very little teeth, and there’s not much you can do (legally and ethically) to recoup the money you lent them.

Months go by and you still are stewing but haven’t heard from them. You consider sueing them in small claims court, but that’s a lot of time, energy, and even money to file everything and go to court – and still doesn’t ensure much, even if you win.

It’s starting to dawn on you that you’ll probably never see another dollar of your money (and that they were a bad friend!) when you receive a phone call from them out of the blue one day.

They apologize for not paying, but you just want your money. They explain that they lost their job and really are in a tight spot financially, but they want to make it right with you by offering $400 to close out the business of the loan. While that falls far short of the $1,000 (or $900 or whatever) they owe you, you were expecting to recover nothing. Even better, they say they can meet you right now to hand you the $400 in cash if you’ll rip up the agreement you both signed.

What do you do?

99 out of 100 times, you’ll probably accept their offer, meet them as soon as you can, grab the $400 out of their hands eagerly, and count your blessings (after counting the money twice).

This is a perfect example of the principal behind unsecured debt, and why debt negotiations and settlements are SO effective with loans or credit that are unsecured. 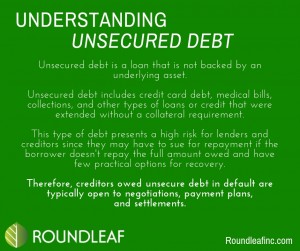 First off, let’s look for an accurate definition of unsecured debt.

As you may gauge by now, unsecured debt isn’t attached to any THING as collateral. When you apply for a credit card, you may have to disclose financial information have your credit pulled, but you don’t promise them your car, your house, or anything else, for that matter, as security.

Secured debt, on the other hand, includes mortgages (the collateral is the house itself, which they’ll take back through the foreclosure process if you don’t pay for long enough), auto loans (the car is the collateral, so look out for the repo truck!), and other loans including some business loans, where you may have to pledge your personal assets as collateral.

Of course, unsecured debt is riskier for lenders due to that lack of collateral or security. If you run up $10,000 worth of credit card debt, for instance, and then stop paying your monthly payments, they have limited options – just like you had when your friend didn’t pay.

The credit card company can call you a whole lot and send strongly worded letters, eventually send the debt to a collections agency (after 90 days in default typically), and tack on a whole lot of late fees and charges.

But all of that still doesn’t put one dollar in their pocket, and you still have everything that you purchased with that $10,000 of credit card debt (hopefully!).

What they CAN’T do is come to your house and start trying to take back those things you bought on the card, nor can they raid your bank account or seize your house or car if it had nothing to do with their account. The same is especially true for medical debt, as they can’t un-do the surgery or treatment if you fail to pay.

Of course, lenders do have some recourse with unpaid unsecured debt (or else, no one would pay!) and that includes suing you for the specified amount plus late charges and legal fees.

That’s always a possibility, but with most types of unsecured revolving debt, it’s not common in the real world. It usually would cost the lender more to sue you, hire attorneys, show up in court, etc. than it would be worth. Even if and when they won a civil legal case against you, that would yield them a judgment – not actual cash.

The next step would be to attach that judgment to your assets, and that’s when they could potentially garnish your wages, seize your IRS tax refund, or attach liens to your person.

Your credit score will also be negatively affected the moment you miss your first payment, as you miss subsequent payments, if the debt goes to collections, etc.

In practicality, most consumers who are completely overwhelmed with high unsecured debt balances (and other secured debts) would look at filing bankruptcy if they got to that point as a means to protect themselves from creditors.

There are different forms of bankruptcies (and I’m not an attorney, so consult a good one for any legal advice), but most people are legally excused from their debts with a Chapter 7 BK, so lenders walk away with nothing – or very little.

Add it all up and it comes down to the fact that your lender will become VERY motivated to negotiate and settle your unpaid unsecured debt – just like you were ecstatic to meet your friend and recover $400 cash in-hand.

However, there is a window on the best time to execute that negotiation and settlement, and a lot of nuance to get it right, save as much as possible, AND protect yourself so they don’t come back after you at a later date.

Your lender also won’t ever promote or publicize that they are willing to negotiate and settle for far less than is owed, and there are several other options that confuse consumers, like credit card counseling programs or debt consolidation.

Debt negotiations and settlements aren’t the best option for all consumers. But, for those who qualify and check the boxes for the right circumstances and situation, debt settlements are a lifesaver, allowing them to get out of debt for far less than what was owed, in a far shorter timeline, and protecting themselves from further recourse without having to file bankruptcy.

Contact us if you’d like more information about debt settlement and to see if it’s right for you!